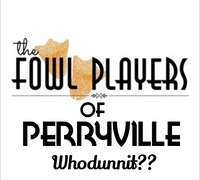 The Fowl Players of Perryville on the Western Maryland Scenic Railroad

This is the golden age of television-1954. On Thursday evening at 7:00 p.m. all of America turns their TV to the Silverstone Universal Network (SUN) to watch “The $100,000 Answer”. The show’s Hostess is none other than that fabulous former dancing cigarette sweetheart, the one and only Chastity White. The current winning contestant is Professor Klinkenhoffer of the Ethics and Law department at Stanford. Not everyone loves the show, as network head and CEO Silverstone is about to find out, when confronted with dissatisfied former contestant Chance Nelson. Chance has involved the FCC and they have sent FBI agent Bluesteel to investigate the accusations, here on a promotional tour.